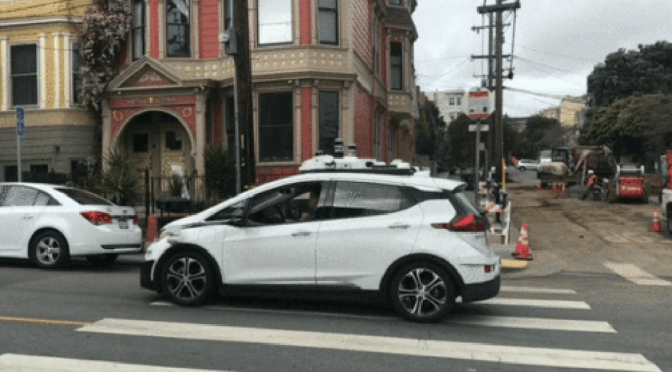 I have been very worried about robots taking away the jobs of people but I am getting more relaxed about it.
It will take a while, if ever, that so many people are going to be replaced by robots. But not for the lack of trying….
Companies would love to have robots do the work.
Imagine, no health insurance, no sick leave, no social security….
There are quite a few robot cars driving around San Francisco and they are not passing the grade even though the authorities are very much on board to license them.
If there is not traffic, it’s one thing.
But with all this hustle and bustle on the streets these “self-driving” cars are challenged.
They hesitate.
They get scared.
They don’t know what to do so they stop; very dangerous on a
busy street.
The Uber and Lyft ambition of replacing these pesky drivers who actually want to make some money when they are working is more of a distant future dream.
I do think that these companies are banking on replacing their drivers though, when I see the valuation of their upcoming IPO.
And our streets are completely clogged from the glut of Uber and Lyft drivers who never, ever, pull over when loading and unloading people.
In Japan the Henn-na Hotel in Nagasaki let go half of its “staff ” of 240 robots. The robots couldn’t answer guest questions or copy passports. Luggage-carrying porter robots couldn’t reach three quarters of the rooms or broke down during rain or snow.
In-room robots mistook snoring for requests of information and woke up the guest with “Could you repeat your request?”.
The Google experiment is at the stage of where the robot can distinguish a banana from little building blocks and throw it into another bin.
Where it is absolutely fabulous to have robotic help is operating on people. Doctors often don’t have to make big incisions and break bones to save lives.
But for companies to buy a $70,000 robot to make smoothies and then tell people that it keeps the price down at $6, well, that’s another story.
Their future vision is to have robots all over the airport with 4-5 “concepts” side by side so they can make us some “form of cuisine”.
I am not as worried anymore.