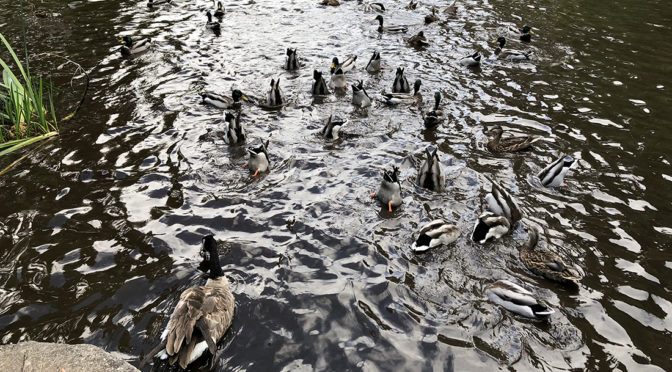 Money Grubbers
delight in taking it all
laughing, laughing
As the people
who create the money
fight for the crumbs
like ducks
when someone throws them bread
biting, pushing, chasing each other
for another crumb

Racism, discrimination and sending women back into the kitchen instead of being in the workforce are not solutions to the problems facing us in the 21st century.
AUTOMATION is the problem.
The uncontrolled, unplanned purely profit-based economic system is the problem.
It is not acceptable to have people be replaced by machines without planning for the consequences.
That is the essence of the problem and the fear of the people.
People see what is coming down the pike.
Forget the fanatical evangelicals whose only goal in life is to outlaw abortion and to rule over women’s bodies and women’s behavior.
They don’t have a clue and they are not behind the general push to the right. They have always been there.
This is about people worried about their future.
And it is a push-back against the untampered unregulated economy at work and the absolute irresponsibility of using AI and automation instead of people at this point in history.
Have no doubt.
Once the work for many blue collar workers has disappeared, these proud people become bums in the eyes of the ones who work.
These people know this reality.
They have done it to others themselves. They have called people bums and loafers. They have opposed health benefits, unemployment and disability insurance as hand-outs. They have supported the money grubbers because they thought that was where their bread was buttered.
They know.
And they are scared.
Unfortunately their protest and fear led them to the Pied Pipers who will promise them what they want to hear. And they are going to be used mercilessly by those same money grubbers because these rightwing Pied Pipers do not have answers. Nor do they want to solve any problems that the blue collar workers are going to face. They just want to cement their own power and secure their steady stream of money forever. And they don’t care whom they are using to get there.
And nobody has the guts to say it:
Unfettered, unregulated economy and business brings out the worst in people, particularly the very rich. It seems already forgotten what happened in 2008-2012 after the deregulation of the banks.
And the first line of aggression of the right is to curtail the rights of women.
But we will vigorously defend our rights.
We will not go back.